You are at:Home»Tech»Electric Bike»How much do you know about bicycle frame geometry
ShareTweet

Bicycle frame geometry is an often overlooked area, but it is important to your enjoyment of the bike.

The length and shape of the tubes and the angles at which they are set will decide variously how well the bike climbs, how quickly it accelerates, and how stable it feels at speed and through corners. Perhaps most importantly, geometry will have a profound influence on how comfortable or not the bike feels beneath different physiological types. 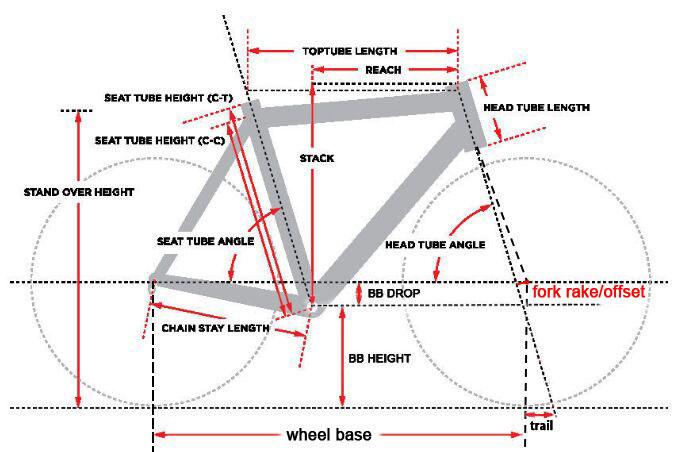 This is the angle of the seat tube relative to the ground. Modern bikes favour steeper angles that put the saddle directly over the bottom bracket, making pedaling easier and more efficient. Putting your centre of gravity further forward also helps with climbing, making it harder for the bike to loop out.

You can change the effective seat tube angle by sliding the saddle forward or back in the seat post clamp, or by fitting a different seat post with more or less ‘layback’ (the distance the clamp is behind the seat post centre line).

The angle between the ground and the head tube is important.

Slack angles, where the fork is raked out and closer to being parallel to the ground, slow down a bike’s steering response, will be more inclined to travel in a straight line. Steeper angles with steer more sharply, make a bike feel better climbing.

Head tube angles generally range from about 66 degrees (gravity-oriented mountain bikes) to 74 degrees (razor-sharp road bikes). As a general rule, you can expect trail bikes to have 66-68°head angles, XC bikes to have higher angles, enduro bikes around 65°and downhill rigs in the low 60°.

Fork rake/ offset is the fork dropout from the straight line of the steering axis (centre-line of the fork’s steerer tube).

The trail is the virtual line where the steering axis intersects the ground is ahead of the tyres contact point with the ground.  The bigger the trail the more stable it is but the more reluctant it will be to turn.

small trail equates to faster steering. If the trail is too small the bike turns quickly at relatively slow speeds round posts/ trees. It feels like you are turning the bike rather than leaning it. As you speed up and you want to lean the bike such that it smoothly arcs through a wide fast bend it won’t. It tries to turn rather than lean and the tyres seem to scrub.

big trail equates to slower steering. If the trail is too long, it is very stable at speed and leans and curves through a graceful arc. When you try and flick it around a corner, it won’t! It leans a bit and just goes nearly straight on Somewhere in the middle it’s just perfect!

On a bicycle with front suspension, when you hit a bump, brake hard or go down a hill fast and get to the bottom the forks compress. As they compress the trail is reduced and the bike becomes less stable.

The cure is to fit longer forks and increase the trail all round or fit harder springs / put more air in the forks.

What are reasonable figures for the trail?

Note that motocrossers use this reduced trail to good effect when cornering. One effect of braking hard at the corner and shifting their weight forward is reduced trail. The reduced trail makes the bike turn quicker. As they exit the corner they sit further back, unloading the front of the bike, lengthening the forks and increasing the trail.

When you change forks on a bicycle if the length of the forks or the offset between the steering axis and axle is different it will change the trail.

Seat tube height is the distance from the centre of the BB to the top of seat tube. It is one of the most important dimension when choosing a bike.

Add the chainstay and front centre measurements together to get the wheelbase. All other things being equal, longer bikes are more stable at speed.

Chainstay length is the horizontal measurement between the rear axle and the centre of the BB.

A longer chainstay length is desirable to increase the wheelbase (making the bike more stable ) and to provide ample heel clearance from the panniers.

Together with the front centre, the chainstay length determines where you are on the bike (central, further back, further forward). There’s no right or wrong here, but greater length can help a bike to feel more stable descending, and also help keep the front end down when climbing. As a rough guide, 450mm is the norm on most 29ers, 435mm on 650b bikes.

The angle between the ground and the head tube is important because slack angles, where the fork is raked out and closer to being parallel to the ground, slow down a bike’s steering response but make descending easier. Steeper angles make a bike feel better climbing and on flat terrain.

BB Height is the distance from the centre of the bottom bracket to the ground.

If it is too high you will find it hard to touch the ground when stationary and the centre of gravity will be high that the bike will be less stable. Your body is also higher up causing more wind drag.

If it is too low the pedals may hit the ground particularly over rough ground in ruts and when cornering.

When you change forks on a bicycle or change tyres, the BB height may change.

For a full suspension XC bike, the BB height would be better between 12.5 to 13.5 inches.

[…] article is written by a passionate e-bike enthusiast on wheelgo.net, he is not a lawyer and the article constitutes no legal advice. It’s only a type of guide […]